The term John Hancock is a modern day synonym for signature in the United States. John Hancock is best known for his signature on the Declaration of Independence because it’s so large. Even though there were 56 signers on the Declaration of Independence, he typically is the one we remember first. A lesser-known fact is that he was also the first person to sign the Declaration. Maybe this explains why his signature is so large; everyone else just wrote smaller? Actually, there are a couple of reasons why he signed so largely.

John Hancock was born on January 23, 1737. His father died when he was seven and so he lived with his wealthy Uncle Thomas and Aunt Lydia in Boston, Massachusetts on the west edge of the Common. Hancock lived in a huge house (with 54 windows), dressed in expensive clothing, had a fabulous red curtain that draped around his bed, could eat plum cake any time he wanted it, and could ride any number of horses from the stable. Basically, he grew up in extreme wealth.

Hancock wanted nothing more than for people to like him, and they did; he was attractive, friendly, kind, generous, and threw amazing parties. But his kindness and generosity and amazing parties weren’t without their purpose. His goal was to get everyone to like him so much that they would elect him to public office; and to get elected he knew he needed to gain admiration and be noticed. To be noticed he dressed in exquisite embroidered satin, velvet and lace, wore gold and silver on his shoes…the richest clothing that he could find. When Hancock was 27 his uncle died and he inherited his massive fortune. It was enough to make Hancock the richest man in New England and the second richest man in America. Wow, that is massive. And so now more people did take notice of John Hancock.

Samuel Adams certainly took notice. Adams was a politician in Massachusetts who wanted to stop England from bothering America and he decided that John Hancock was the man to do it – because of his massive fortune and popularity. So Samuel Adams made sure that Hancock was elected to office as a selectman (a member of the governing board for the town of Boston).

In 1765 England enacted the Stamp Act on America. This imposed 55 different taxes on traded goods. John Hancock owned 20 ships that transported these taxable goods: whale oil, fish, lumber, cloth, paper, books, furniture, wine, salt, leather…you get the idea. Hancock said that there was not a person on earth or a single thing in the world that would make him pay a single cent of that “damned tax.” The Patriot Party and other Americans agreed. When England repealed the tax, Hancock threw an over-the-top party at his house (to celebrate and of course to increase everyone’s admiration of him). Flags adorned his house, tables were piled high with food, and when the townspeople gathered in droves on the Common, he opened his doors to everyone for the grandest party ever thrown in Boston. He brought out a 126-gallon cask of Madeira wine for people on the Common who couldn’t fit into the house. And at the end of the night, fireworks lit up the sky. John Hancock did everything in the grandest style to ensure that he was admired and popular.

So by this time John was well noticed and extremely popular and became one of Boston’s four representatives to Massachusetts’ governing body. He played his new position up big time. He would showboat around in one of his 9 modes of transportation: several chariots, a chaise, a sulky, a kittereen, sleighs... And when he felt people weren’t paying enough attention to him, he would give them very generous gifts – coins to children, a fire engine or concert hall or bandstand or lime trees to the town – generous gifts indeed. But he gave the gifts for the attention he received and not so much the needs of the recipients.

Anyhow, in 1767 England tried again to tax Americans. John Hancock refused to pay. In April of 1768 tax inspectors boarded one of Hancock’s ships. Hancock and his strongmen refused to let them inspect. Another time they locked an inspector in a cabin while they unloaded. This made King George furious, so the King put John Hancock’s name on his “Dangerous Americans” list. By 1775 it was clear that war between England and the Colonies was inevitable. Massachusetts had formed their own government and made John Hancock the president. The King then moved Hancock’s name to the very top position of his “Dangerous Americans” list and put a price of 500 pounds on Hancock’s head. English troops marched into Concord looking for weapons and John Hancock; John Hancock evaded the English army by fleeing to Philadelphia.

Hancock was a delegate from Massachusetts to the Continental Congress, a meeting of representatives from all of the Colonies. They met in Philadelphia to discuss what to do about England. A couple of weeks later they were suddenly without a president of the Congress. The members of Congress voted unanimously for John Hancock to be its new president. This would show the King how they felt about him and his “Dangerous Americans” list. John Hancock was in his element, the center of attention, admired, wearing his finest clothes and making important decisions. And signing his name to these important decisions he absolutely loved to do.

Over the years John Hancock practiced writing various styles of his signature using underlines, curlicues, and underlines with curlicues. By the time he became president of the Second Continental Congress, his signature became larger with more swoops and swirls including back and forth underlines that were entwined with curlicues. In the spring of 1776, Congress discussed whether or not America should declare their Independence. On July 2nd they agreed yes, they should. It took two more days to agree on the wording and another month for the final to be drafted on parchment for members to sign. 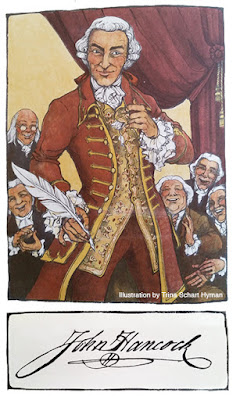 John Hancock was first to sign. With his fancy lace cuffs flipped back, he dipped the quill pen into the inkstand and then signed his name – very large. “There! King George the Third can read THAT without his spectacles. Now he can double his reward for my head.” This is the most commonly accepted reason that John Hancock signed his name so large on the Declaration of Independence: so that King George could no doubt read it without his glasses. It was an “in your face King George” move. But the vain and egotistical and side of John Hancock, that liked to showboat about and throw fabulous parties and give generous gifts in return for praise, also knew that if America won the war, he would be praised and admired and honored as the first signer of the Declaration of Independence. He was making history. And being the first to sign America’s Declaration of Independence was his pinnacle “look how great I am” moment.

Now you’re a little smarter, Girlfriend — And so am I.

Want to know all 56 signers of the Declaration of Independence? Find it here:
http://www.archives.gov/exhibits/charters/print_friendly.html?page=declaration_signers_factsheet_content.html
Posted by Get Smart Girlfriend at 6:27 PM No comments: